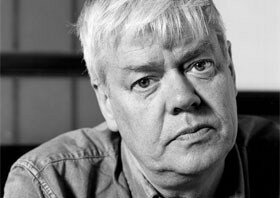 The first question I put to Bernard MacLaverty (after I’ve quizzed him on how much he digs the Hexham festival yurt) is whether, after nearly fifty years of writing, he still feels that his earliest work was written by the same author he is today. MacLaverty has just published his Collected Stories, a volume as dense as Christmas cake and spanning a body of short stories that extends from 1977 to 2006. Although he is renowned as a short story writer, his novel Gracenotes was shortlisted for the 1997 Booker Prize, and he has also authored screenplays, television scripts and even opera. I’m curious as to whether, over the course of such a long and varied career, he has maintained a clear sense of authorial self.

Considering my question, MacLaverty turns to an analogy in one of his own stories, ‘At the Beach’, in which a middle-aged woman, alone in a Spanish cloister, realizes that “she was still the same person she had been all her life […] Her soul was the same”. “There’s a line of yourself”, explains MacLaverty, a connective thread that remains unbroken. He adds that he’d hoped, with time, he might have relaxed more into the writing, become more used to it, but that sometimes it gets more difficult. “You can run out of ways of seeing”, is how he puts it, although, judging by the 48 stories in the collection, MacLaverty has more ways of seeing than most –a feeling that’s confirmed when he brandishes his iPad, displaying a considerable collection of his own electronic art: fantastically weird abstractions, cartoon-esque figures, blotches of sweet-shop colour. MacLaverty, as his stories exemplify, has an infinite set of angles on life. If music is a theme that MacLaverty is especially fond of, most of his stories might be said to be played in a minor key. They are carefully wrought, with pitch-perfect dialogue that offers the voices of children, mothers, middle-aged men and priests in turn, without ever faltering or hitting a dud note.

It’s the Belfast stories, inevitably influenced by the Troubles, which attract me most, with their measured vignettes of violence reduced to banality, accents or surnames blown to grossly significant proportions. A young wife and mother, victim of domestic abuse, smokes alone in a hotel room after a failed attempt at romance. A man is violently abducted by the Belfast IRA and forced to recite the alphabet to prove where his loyalties lie. MacLaverty’s development as a writer gained momentum in 1977, when the formidable English academic Philip Hobsbaum handpicked him to join the now famous ‘Belfast Group’. Its members included Seamus Heaney, Michael Longley and, later, Paul Muldoon, but MacLaverty is matter-of-fact about his membership, (he was working as a lab technician at the time), describing the practicalities of printing and posting out work to fellow group members, their Monday night meetings fuelled by tea alone. In his later talk, he explains “None of us had published anything. None of us knew we were even any good”.

This brings me on to a question about the teaching of writing more generally. MacLaverty has worked as both a schoolteacher and as a teacher of Creative Writing at the University of Aberdeen. I ask him for his view on ‘teaching’ writing, particularly in light of Hanif Kureishi’s rather crushing statements on the subject earlier this year. The phrase “Creative Writing” is a problem, he agrees, “and ‘Creative Industries’, I hate that.” He tells me about an inspiring former English teacher, who introduced him, through John Donne and Shakespeare, to “the weight and the wonder of words”. Returning to the teaching of creative writing specifically, he argues that “the only worthwhile teaching is one-to-one”, explaining that being taught by experienced writers enables a novice to “pick up shortcuts – things it would have taken them three years to figure out on their own, and that is valuable.” Laughing now, he talks about his time as tutor on the renowned Arvon writing retreats, the “hardest work a writer will do”, not so much because of the creative demands, he confesses, but because “you have to be up all night drinking with the ones that want to drink, and then up early the next morning, hungover, to be with the ones who want to get up and drink tea”.

MacLaverty’s easy humour pervades his Festival reading, including a merry dismissal of one of his much-quoted elegies on the short story as “bulls**t”. His reading of two of his own stories (‘On the Roundabout’ and ‘The Clinic’) has an almost incantatory quality, while his later discussion is lively, sending him swivelling unselfconsciously in his stage chair when relishing a particularly juicy comment. At the end of my own interview with him, I asked him for his perspective on how much art and creativity is valued today, suggesting that one of his characters’ phrases, “nobody ever survived on poems”, is becoming gloomily prevalent. He bats the suggestion away, unperturbed, and states, as if it’s a truth that must be obvious, “the only way we can see ourselves is through art. Art and love. That’s what’s left to us.” Those many hundreds of ways of seeing all carry, no matter how small the sliver of vision, this understanding at their core.

To find out more about Bernard MacLaverty, visit his official website.