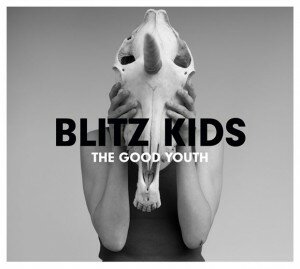 don’t know Blitz Kids, they’re a 4-piece UK rock band who just want to have fun. They come on stage to a quote from the first Home Alone film and immediately break into their set with ‘All I Want Is Everything’. This immediately gets the crowd’s attention, with the front three rows singing back the words “we are the good youth!” at the top of their voices, as well as the more laid back gig-goers quietly singing back from the bar. The song is catchy, bouncy and makes them immediately likeable. They’re not particularly unique in sound, being your typical pop/rock band and very much like Young Guns and 30 Seconds To Mars (although guitarist Jono Yates describes them as a cross between Jimmy Eat World and ‘some motown sh*t’), but there’s something about them that stands out.

When hearing Blitz Kids, it’s impossible not to bob along and move to their music, as is apparent when the crowd is jumping, arms swaying and punching their fists in the air throughout. They are very fast-paced, just want everyone to have a good time, and it’s clear to hear the pop influences in their songs that work very much in their favour.

Slower songs like ‘Long Road’ give fans a chance to stand back and take it easy, “ready to go nuts after the song ends.” The song itself sounds a lot like Simple Plan and still has some energy and passion to it, with very marching band style drum beats and softer guitar parts. The crowd sways their arms and passionately sings the words back to Joey – anyone would have thought there were 200+ people in the venue, rather than only about 50, with the volume at which the crowd were singing.

They are a very down-to-earth band, constantly thanking everyone for being there, thanking I Divide and Fort Hope for touring with them, and especially grateful when the majority of the crowd said they had bought their newest album The Good Youth, an impressive feat in this digital age.

Overall, Blitz Kids have some pop-rock anthems such as ‘Warrior’, bouncy riffs, fun lyrics and above all want you to have as much fun as they do on stage. They’re a true bunch of lads who love their fans and provide a good night out, even if you don’t feel like getting in the crowd and moving too much. They left the stage to ‘Let It Go’ from Disney’s Frozen, a light-hearted nod to Jono’s love of the film. If you’re a fan of all things pop-punk, you’ll surely enjoy Blitz Kids.

For more information on future events at Think Tank, visit their official website.