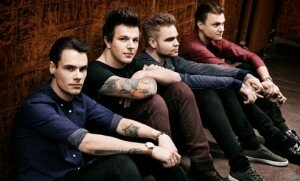 Tasha recently caught up with Jono Yates of Blitz Kids, after their gig, to learn about the band. Read on for excerpts about their experiences, musical influences, and Yates’ own love for all things Frozen…

T: So, what musical influences have you had? Bands/genres…
J: All sorts, honestly. Recently I haven’t been listening to much except like pop music and for the album as well all we were listening to before we wrote that was just pure stuff that’s in the charts, and that’s not because we wanted to go in that direction but, you know, it was just like there wasn’t a lot of rock albums coming out that I was really impressed with. Obviously I listen to all the classics that I listened to as a kid and that. You can tell the influence that, I listened to One Direction […] you can tell especially in the choruses it kind of comes through, it was never really intentional to go down that route but at the same time we find ourselves going down that route.
T: It’s what sells isn’t it?
J: […] It’s just more fun to play, better seeing kids sing about you rather than some mental complex beat that I used to spend hours trying to write and now it’s just like, keep it simple, and it’s easier to play on stage – it’s more fun.
T: That’s important.
J: It is.
T: So, to people who don’t know what you sound like, how would you describe the band’s sound in general?
J: Probably a mix between Jimmy Eat World and, I don’t know, some kind of old Motown sh*t? I honestly I don’t know, we sound like a lot of other bands that are doing the same sort of thing we are doing. We don’t pride ourselves on being massively different or whatever, just good time music, music that is uplifting, just makes you feel good and makes you want to sit in the sun and have a pint with your mates.

T: So what is the best and the worst thing about touring then?
J: The best thing about touring: meeting new people, traveling, seeing new places that you’d never normally see, I guess. For me, there’s no real bad part, for the other lads it’s like they miss home and their girlfriends and stuff, but I ain’t really got anything at home so, I love it on the road! I guess maybe I miss my mum sometimes, but…
T: Miss home cooking?
J: Yeah! Absolutely. But, yeah, everyone goes through it so it’s all fine.
T: All right, so, your latest album…
J: Yep!
T: What was the general reaction?
J: Good yeah, really good, from fans and critics alike. Yeah it was, we try not to take too much notice of critics but they were dead nice about this one.
T: So what’s your favourite song on the album?
J: My favourite? Probably ‘Title Fight’ or ‘Sold My Soul’ just cause they’re heavier and more ballsy. Y’know what I mean?

T: So, daft questions […] what’s the best gift you’ve ever been given?
J: From a fan I got a Frozen colouring book. I love Disney, so I’ve been working my way through that. And the next night someone gave me the Frozen soundtrack and CD. I love Frozen.
T: Has that got something to do with the last song played at Glasgow?
J: Yeah. We go off stage and the first song that comes on is ‘Let It Go’; that’s my favourite song. It’s dead good going off and people sing it. I keep my ears in so I can keep listening to it!

To find out more about Blitz Kids, visit their official website.

This entry was posted in Music and tagged Blitz Kids, Interview. Bookmark the permalink.