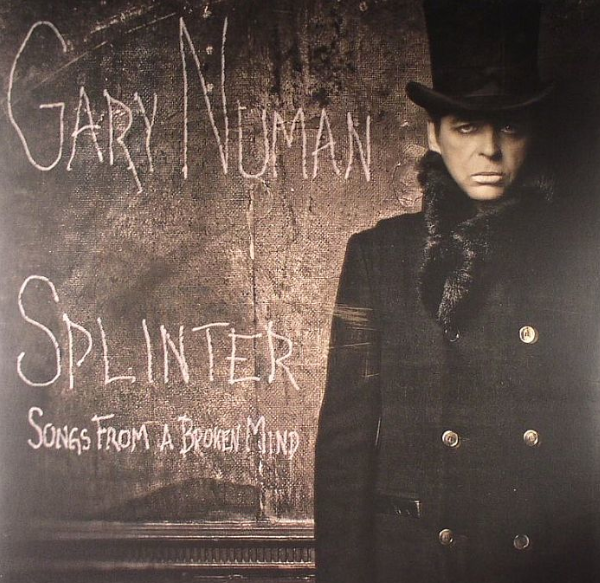 Responsible for such tracks as ‘Cars’ and ‘Are ‘Friends’ Electric?’, Gary Numan hit a self-admitted creative rock bottom in 1992. He has since ascended by way of breaching darker territory and bringing himself on par with the mainstream’s closest equivalent to industrial rock. His collaborations with producer Ade Fenton for the past two albums (Jagged and Dead Son Rising) have paid off critically and commercially, and Splinter (Songs From A Broken Mind), which is set to be released on October 14th, is foreseen to continue this success.

Running throughout this album is a current of dissonance and conflicting emotions, worthy of the album’s title. Numan’s vocals, mannered and strangulated as ever, are underpinned by screeching guitars and heavily distorted bass-lines, evoking the often tumultuous nature of emotional torment. A wide range of sound colours are used, which help to provide a suspenseful and yet oddly raw atmosphere within such well-produced tracks as ‘We’re The Unforgiven’.

Splinter‘s tone isn’t rigid, however. There are multiple breathers between heavier tracks, which tend to provide a cinematic, ambient atmosphere. ‘The Calling’ is perhaps the most satisfying of these songs, although the synth strings get a little grating on the ears about halfway through the track.

The bland piano ballads from Dead Son Rising have made an unwelcome return. The majority of ‘Lost’, for example, is more than a touch insipid, although after three and a half minutes of meandering the track builds into a sinister passage led by the vibrato-heavy whine of a synth lead. Unfortunately, whole songs can’t just be salvaged by twenty-odd seconds of good music. Another criticism might refer to the all too frequent use of silence as a method of building tension, which grows tiring even before the first half of the album has come to a close.

Although there are a couple of tracks you may find rather easy to skip, there is still a lot to like about Splinter. For example, Numan has a knack for finding sounds that should not work with the arrangement , be it the fat distorted bass through the verses of ‘Here In The Black’ or the offbeat click during most of ‘Everything Comes Down To This’. While it doesn’t always hit the spot, there’s a whole host of other times where this approach works perfectly, which perhaps owes to the aforementioned theme of dissonance.

Making assumptions from the title alone – or indeed the chanting of ‘everything bleeds’ during the album’s first single, ‘Love Hurt Bleed’ might seem like it’s going to be the greatest angst-fest since the heyday of Nine Inch Nails. However, I cannot help but emerge from the album’s conclusion, the gorgeous and introspective ‘My Last Day’, feeling strangely empowered.

Splinter is a solid example of an accessible album of dark music, the work of a sound architect who has created his most developed approach to electronic rock yet, blended perfectly in its execution.

This entry was posted in Music, Recordings and tagged Gary Numan, Review, Splinter. Bookmark the permalink.