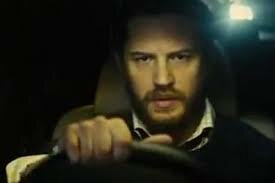 There’s a quick cut at the end of the trailer of Locke where a car door is opened in a dramatic fashion. It’s the subtle climax to a taut promo to a thriller in which, seemingly, hundreds of lives are in the balance. The trailer gives nothing away in terms of plot, keeping its cards close to its chest.

This is both to the film’s benefit and detriment. On the plus side, you know nothing about what the film is about, letting its mysteries unfold before you as you watch it. On the other hand, the film is absolutely nothing like the trailer suggests, typified by the fact that the shot of the opening door is actually played in reverse. For the two reasons above, you shouldn’t really be reading this review.

Locke is instead a drama about stress and frustrating complications that suck you in, largely thanks to director Steven Knight’s decision to set the film entirely in a car (save the first two minutes, where Hardy enters the car) and Tom Hardy’s incredible performance. It’s a film of high stakes on an intensely personal level for our candid protagonist, Ivan Locke, making decisions across three separate plotlines that will determine the future of his family, his job and, well, his future in general. His circumstances are bred from the problems of everyday life, but we pity as much as root for Locke as he makes steps forward and backward in his progression through life.

The most pure one-man-show since 2011’s Buried, Tom Hardy is mesmerising as Locke, mainly because he doesn’t have any choice not to be. The film is entirely resting on his shoulders, and he carries it like Atlas from Birmingham to London. Even in the most contrived of moments, he delivers with conviction and confidence, smoothing over any cracks that begin to form (and it will grow and IT WILL GROW!) The voice cast are also excellent, giving performances purely with words and carrying it off with skill, with Andrew Scott stealing the show as Locke’s foolish subordinate at the other end of the phone.

Despite Hardy’s efforts, Locke is, at times, a glaringly flawed film. The transitions from phone call to phone call are distractingly weak and dilutingly episodic; the film becomes piecemeal as Knight clumsily chops his story up into smaller pieces, and the tension is released instantly and violently at eye-rollingly intermissions. The score that punctuates these moments is bland as can be, when the film might actually thrive with a Cliff Martinez-alike electronic score that ratchets up the tension as well as the cool. Knight’s move to shoehorn in a raging relationship with Locke’s father is also incredibly misjudged, with Ivan’s rantings completely out of character and unrealistic compared to the hard-hitting tension of the rest of the film.

Although a bit inconsequential just after you’ve finished it, Locke is still an experience, created by a flawed genius. Knight’s idea and Hardy’s acting are raw, and so is the film at its best. When it becomes tainted with contrivance, it disappoints, but for 80% of the time, Locke has you, well, in an inescapable ‘headlocke’ (I’m here all week! T-shirts are in the foyer!).

For more information on films showing the Tyneside Cinema visit their official website.

This entry was posted in Film, Screen and tagged Film, Locke, Tyneside Cinema. Bookmark the permalink.