Posted on 27 September 2013 by Cuckoo Intern 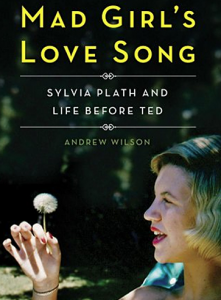 Sylvia Plath lived for thirty years and yet the majority of biographies have concentrated on just seven – from the house party where she met her future husband, Ted Hughes, to the day where she committed suicide by suffocating herself in a gas oven, leaving two glasses of milk on the side for her children. These events are part of the cultural mythology of Sylvia Plath and she’s almost become a symbol of deep, melancholic ‘bookishness’ in popular culture (see examples of this in characters such as Rory Gilmore in The Gilmore Girls and Kat Stratford of 10 Things I Hate About You).

In this respect Mad Girl’s Love Song is not only an excellent book but a necessary one. Andrew Wilson concentrates exclusively on the twenty-three years before Plath met Hughes. Sylvia Plath had written for publication since aged eight and had been raised for greatness since birth by a devoted, but often suffocating, mother. By the time she was in high school, she was supplementing her income by selling short stories and poetry and while at college, she sold stories for up to $500 each: an income most writers in their twenties could only dream of today, even without taking into account the fact that a dollar in the 1950s was worth substantially more. Some of her most famous short stories and poetry came from this time as well as experiences, which would later inspire The Bell Jar. You could call Sylvia Plath a lot of things based on her early life: over-achieving, ruthlessly competitive, perhaps even self obsessed but irrelevant will never be one of them.

It’s a little clichéd to say that a book was too short, although it isn’t usually meant as a criticism. Here the narrative moves at breakneck speed, stuffed full of fascinating anecdotes that could be chapters in their own right and at the very least should be paragraphs. Poems, letters and short stories (some of them unpublished) are referenced but not quoted at length and I can’t help thinking that the book might be better if they were included. Not all of them obviously: Plath was incredibly prolific and many are still in rarely accessed private collections but the odd excerpt here and there (or even just quotes longer than a sentence) would have made the book feel richer, deeper and far more immersive. Though frustrating at times, the main effect of this book was that it made me want to immediately go out and read Sylvia Plath’s work which is perhaps not far from what Andrew Wilson intended.

Andrew Wilson will be appearing at Durham Book Festival on Sunday 13th October.  He will be joined by acclaimed singer/songwriter Kathryn Williams in a celebration of Plath’s autobiographical novel The Bell Jar.