Published by Bloomsbury
Available to buy on from 8 May 2014 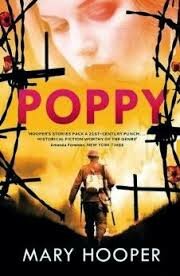 Mary Hooper is an eminent writer of historical fiction for young adults. I can still recall the smallest details of her plague-ravaged London (At The Sign of the Sugared Plum), or her eerie tale of occultism in Victorian England (Velvet). In Poppy, published in the year that we commemorate the centenary of the start of the First World War, Hooper turns her attention to the little-told story of nursing VADs. Poppy, a former parlour maid, receives a swift injection of patriotic fervour in 1914, and gives up her life of scrubbing silver and serving tea to become a voluntary nurse in a Southampton hospital, tending wounded soldiers returning from the trenches. Hooper offers an interesting angle on a time in history that we are all inevitably very familiar with and, in doing so, brings all the immediacy of the senseless horror of a war whose tragedy risks being dulled from the distance of a hundred years.

This book does not skirt around the disturbing realities of life in an army hospital. Poppy, initially unexperienced and full of trepidation, soon comes face to face with the nightmarish results of trench warfare. She sees soldiers horribly disfigured, “with scorched flesh…a ghastly imitation of a face”. Her wards are filled with men bearing suppurating wounds, missing limbs and unimaginable psychological scars. Although the visual imagery is, quite rightly, unflinching, Hooper subtly hints at some of the quieter tragedies of the war. A soldier who loses his twin brother in the field becomes ghost like, eventually dying of sorrow, and a wife shrilly refuses to be reconciled with her disfigured husband. A wider picture of the effect of the First World War on British society is carefully constructed, with significant nods to changes in attitudes to class and gender. Poppy’s illicit relationship with her former employer’s son, Freddie De Vere, reveals how much the war did to change the perception of the divide between upper and classes, (as well as illustrating the very real resistance there was to this). Hooper is excellent at weaving in small but important details without making the reader feel like they’re regurgitating a history textbook; Pal’s Battalions, conscientious objectors, wartime propaganda, attitudes towards Prisoners of War, are all built into the narrative to create a novel that, despite its focus on a hospital in the South of England, successfully recreates the atmosphere of wartime Britain as a whole.

I particularly liked Hooper’s technique of intertwining Poppy’s own letters with the narrative. Not only does this give the reader a better insight into her relationships, it also emphasises the enormous significance of the letter as a form of communication at the time. It is incredible to realise that letters were passed back and forth from the abject trenches of France to people waiting anxiously at home, and whenever this theme creeps up in the narrative, it suddenly seems remarkable and hugely poignant. Poppy is an absorbing study in wartime stoicism, throbbing with war’s simultaneous terror and thrill.