Posted on 6 December 2014 by Laura Brewis

Review and photography by: Tasha Peto 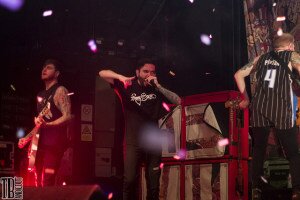 The last night of the All Signs Point To Britain tour for A Day To Remember brought a full house to Newcastle’s O2 Academy.

Opening the stage was British pop punk band, Decade. They’re talented and have a handful of good songs but they didn’t really seem to get the crowd moving. However, they do spark a slight sing along. This is a band that is better to hear for the first time on CD than they are live. Saying that, their set is enjoyable, filled with songs from their debut album Good Luck and singer Alex Sears is quite chatty, something support bands often struggle with.

Next up was Lower Than Atlantis. The audience really seemed to respond well to them; they’re a band who’ve toured the UK many times and are already quite a well known and respected bunch. Singer Mike Duce’s strong vocals caught the attention of the crowd and had around 50% of them singing along. He was thankful of being brought out on this tour and made the crowd move, jump and even crowd surf one last time before telling us “it’s the last night of tour, I can do what I want”. They were definitely a good opening act for A Day To Remember.

As the lights go down the crowd are restless and the Space Odyssey theme tune starts up. Singer Jeremy McKinnon burst onto the stage with his arms open, embracing the crowd. The band kicked straight in with The Downfall of Us All, one of their most famous and energetic songs. As soon as the song got going, so did the confetti cannons and smoke jets – if it’s one thing this band does right it’s stage effects.

The vocals were strong and on point; Jeremy didn’t miss a single beat or a breath out of place between head banging and running to each side of the stage. The songs were a good mixture of old and new, so for those who hadn’t picked up the bands latest album Common Courtesy there was no need for standing awkwardly and pretending to know the words.

A few songs in, a masked man in a Spiderman outfit (most probably the bands’ photographer Adam Elmakias) jumped on stage with a t-shirt gun. As you do… While Spiderman was busy shooting t-shirts to the crowd the band were head banging in unison to I’m Made Of Wax and Larry, What Are You Made Of? It’s clear in moments like this how in sync the band really are and how into the music they get.

Through the night the band made faces at each other and had in-jokes on stage. Jeremy kept a strong bond with the crowd throughout the night, pointing at people on the front row, making eye contact and acknowledging those sat on the balcony, making them feel like they were still part of what the night’s show is all about; having a party.

Beach balls were suddenly thrown out to the crowd and bounced around, people jumping up to hit the balls as they came down nearby – even the security guards were enjoying themselves at this point.

10 or so songs in and it was time to slow it down a little. Jeremy placed his mic on the stand and the rest of the band seemed to stay in their spots as they played End of Me and Have Faith In Me, some of their slower and more heartfelt songs. Lighters and phones went up in the air and it was a truly beautiful sight; it brought a smile to all their faces and at that point there are at least three girls either side of me crying and wiping away tears. Jeremy gave the usual speech of ‘thank you for coming out, thank you to all the support bands’ and they went straight into Sometimes You’re The Hammer, Sometimes You’re The Nail, finally ending their set on All I Want. As A Day To Remember left the stage, the crowd instantly started chanting ‘one more song,’ clapping and stomping their feet; the whole building felt like it was shaking, especially up on the balcony.

A few moments later Jeremy came on stage with an acoustic guitar, followed by lead guitarist Kevin Skaff. ‘I thought we’d come back and play a couple more songs, especially this one because it means a lot to me’ and of course, they begin playing If It Means A Lot To You. The rest of the band walked on stage during the song to finish it off and Jeremy told us all this really was their last two songs. All Signs Point To Lauderdale started and half a dozen people ran on stage with rolls of toilet paper, throwing them into the crowd, including Mike Duce, who seems to be having a great time throwing toilet paper at teenagers.

At the end of their set the confetti cannons went off again, streamers are fired above the crowd and the smoke jets went off twice as much. It was such a fun and colourful sight, as the party atmosphere of the night continued right to the very last note.