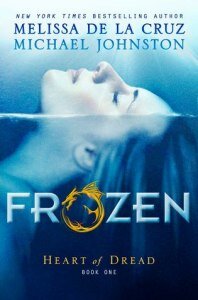 Frozen: a tale not to be confused with letting go and singing snowmen, instead we have teenage slave trafficking and bloody dismemberment.

Honestly, I like it. I’d say fantasy wasn’t my deal but the whole post-apocalyptic thing sat well with me. Maybe I’m just in withdrawal from watching The Walking Dead but seeing humanity crawling on its hands and knees is still so fascinating to me. Often, people are shown to be feral creatures that fight over scraps just to let their families get another meal. This book plays to that same rudimental faculty; only the people are supressed by their government.

This is book one of the Frozen series and it introduces us to our presumably long-term characters and the world they live in. We have two point of view characters: Nat and Wes. Oddly, the two are in love. I like that because we get to see both sides of romance but it bounces too quickly between each POV with the short chapters to keep a flow for my liking. It also means the book seems to move slower than it actually does due to the apparent scene change which is dragged out through a new perspective.

That is the main problem with this book for me. Although the ideas are all there, the themes, the plot and the nitty-gritty characters with their nitty-gritty backstories but the writing falls short at times. We end up with large info-dumps at the beginning of paragraphs and scene changes with sparse details where some were needed.
I didn’t want to like this book. It wasn’t beautifully executed with the writing and the literary, judgemental side of me wanted me to stop liking it. As we have already discussed, it was good. The characters were compelling. The plot was engaging. The themes were thematic. It ended with me wanting more which for any story, well-written or otherwise, is a benchmark for a good story. If you pick this up do not expect critical acclaim or perfect prose, all you will get is a good story. Sure you may sneer at the flaws of another writer but you can’t help but admire their vision for their post-apocalyptic world.

I would give this book a firm four out of five stars for the story and two out of five for the prose. Take from that what you will if you are looking for a good story or a good book.