Posted on 7 December 2014 by Laura Brewis 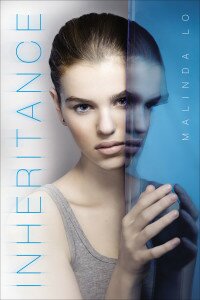 It was all too late when I realised that I had set myself with the task of reviewing a book of a series I hadn’t come across before. Malinda Lo seems to have gathered a lot of fans in the LGBTQA community and many praise the first book of the series, Adaptation. I set myself the task to go through Adaptation first and then read Inheritance. This turned out to be, however, a fairly pointless exercise. While it is immediately clear that Inheritance is the sequel and it’s good to have a sense of familiarity of the characters, it reads just as well as a standalone book and the plot takes off in a direction which allows the reader to acclimatize themselves with Lo’s world quickly.

The story picks up from Adaptation, as we’re thrown back into Reese and David’s headspaces. It’s clear that, after they have been adapted with alien DNA, they’re not the same anymore. In Inheritance, Reese is torn between the love for David and for her ex-girlfriend, Amber, who is an Imrian. Meanwhile, the government and the Imrian alike are out to get the two teens. However, this remains as more of a background plot, as the story centres on Reese’s choice between two worlds that can’t seem to reconcile. This choice will decide the future of all, humans and Imria alike, as well as the inheritance that she and David will bring into the universe.

I have often been screaming about how the majority of YA novels sadly seem to lack LGBTQA characters. Unless you are specifically looking to find an adolescent-themed novel on queer issues, it’s unlikely that you’ll happen to come over one. I was happy when I did. The coding of Reese’s bisexuality is accurate and very down-to-Earth for a Sci-Fi novel and the representation of institutionalised homophobia is nothing but striking. It was clear from Adaptation that Lo is very versed on issues within the queer community and has the talent to represent them well.

This is, however, the reason why I probably shouldn’t have read Adaptation and just gone straight for Inheritance. The sequel definitely doesn’t live up to the fast pace and elaborate plotlines of the first book. The writing, while good, is heavy and downright sloppy at times. While it’s good to have the representation of a polyamory romance, the book didn’t have to focus so extensively on it. I decided to read it because I thought it would have the essential Sci-Fi elements: the aliens, the fights in space, the futuristic landscapes, all that. It turns out, the novel could not have been labeled Sci-Fi and it still would have essentially remained the same book.

Overall, Malinda Lo should definitely be praised about her depiction of bisexuality and queer themes in her books, however Inheritance in particular was way too focused on romance. When engaging with the series, one can definitely start and finish with Adaptation, and approach Inheritance only if they’re feeling particularly brazen. Less kissing and more aliens in YA Sci-Fi from now on, please.