REVIEW: Kill It Kid – You Owe Nothing 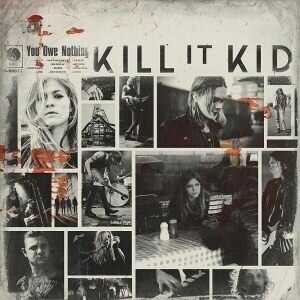 The fourth album from the heavily Americana-influenced band Kill It Kid, You Owe Nothing, is a thrill ride to listen to. It doesn’t just feature the bluesy- grunge stuff the band are known for. It’s got rock n’ roll, heavy metal and a little dose of punk. The songs on offer are guitar- driven and full of heavy drums with grungy undertones. After a listen, I’m pretty annoyed this is my first experience of their music. If you’ve never heard of them before, they have a unique bluesy sound that has been borrowed but is still somehow theirs.

Leader Chris Turpin has described KIK’s attitude towards making music: “We started off with the ethos that we’re doing this for ourselves and not to please anybody else. The modus operandi of this band is to create something honest and simple.”

As you hear the lyrics scream about heartbreak and struggle it makes each track feel refreshingly honest and totally real. Although they do sound reminiscent of American heroes, this Bath-based band can sure change the way we have recently been hearing rock.

Opening with a thrill, nothing will excite you like the throaty screeches heard from Turpin in ‘Black It Out.’ A grungy squawk that is acutely delivered and only gets stronger on the second song, ‘High Class.’ Many of the songs lure you into the grunge-Americana-fusion breakdown. It’s quite satisfying to listen to. It’s no wonder that five years ago, when these guys started, they were widely recognised as one of the best new acts around.

One of my favourite tracks on the album is ‘Caroline.’ It has catchy lyrics like: “Caroline Caroline, abuse and never treat me kind/In your room you can wrap me up and kill me and roll me home” sung almost like a power-ballad. It’s softer, mellower than previous stuff, which makes it sound so different, but in a good way; it really shows the versatility of this band. Another standout track from the album is ‘Cheap Revival,’ which delivers a fresh take on rock with a beat you can’t resist dancing to. Closing with ‘Law of Love,’ a haunting harmonious song that showcases Stephanie Ward’s vocal ability, the whole album is filled with genre-bending favourites.

From the chords, to the riffs, to the drums and then not to mention the vocals, everything is of the highest quality. KIK have so much talent on offer. The album will leave you scratching your head at just how talented the band are. And, like – why haven’t we been listening to them more? Although the influences of American blues are hard to ignore not once does it get boring.