Posted on 3 December 2014 by Laura Brewis 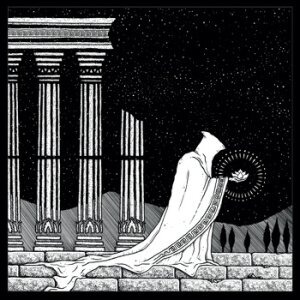 I must admit that bands like Botanist, Ordo Obsidium and even Lotus Thief themselves were unheard of to me. I am not that familiar with space rock  or the players that dominate the genre. However, one thing I would say after listening to Lotus Thief’s latest album, Rervm, I would not solely classify this band as  totally confined to space rock.

Opening with ‘Aeternvm’ begins  with gentle female vocals before the drums explode and are joined by otherworldly  synthesizers. It could be described as ‘black metal’ but there is no real menace. The track ends with natural sounds : birds chirping, owls hooting… It’s  almost like falling to sleep, outside in the wilderness with the only comfort of seeing brightly- it stars.

This continues while playing second track, ‘Miseras,’ but this is not a relaxing song. You are woken by the building use of guitar riffs that almost shake you until the end of the track that drowns the music with natural sounds once more. It almost feels like you are among the duo, in the  woods or a forest armed  only with a guitar .

Usually metal songs that are lengthy can be quite a challenge to sit down and listen too . However, Lotus Thief are like magicians with their instruments, creating a dip in time and space so that it doesn’t feel like you have just heard a mammoth eight  minute-plus song.

You might notice that the singing heard gives  each track a slightly gothic feel too. There is a doom laden atmosphere with Rervm that you just can’t ignore. But this type of air is good for the album. It makes those darker riffs much more pressing.

My favourite track from the album had to be ‘Lux.’ A  heavy bass, fog-like synth and dreamy guitar work gives  it some real texture. It felt like something you would hear stargazing , then you pause because you just saw a comet fly the sky… As the tempo rises you can almost see brightly-lit shooting colours in the night sky become more apparent, ending with explosive sounds – almost like whole world’s  being blown apart.

Rervm closes with ‘Mortalis,’ which has scary-sounding vocals as the lyrics are not sung  but snarled. This gives the album a chance to end with a final charge to boil up some drama. The use of guitar has new power on this closing track and the melody finally comes to a dynamic climax then the final gasps of synth rest.

Lotus Thief have weaved this compelling- sounding album to showcase their knowledge of ancient texts such as the 1st Century poem ‘De rerum Natura’ which spread  ideas of universality of energy, free love and rational thought. “Nothing from nothing ever yet was born” is a line that is the duo seem to channel the most.

Through the 2,000-year-old journey of poetry poised within it, Rervm is a great trip to take. Almost hypnotic, this is a collection that is huge fun to listen to – even if just for the creating own little situations of spacey situations in your head. I’m sure that replays would engage a whole set of different and new ideas.

I mentioned that I was completely unfamiliar with this band and their earlier projects. Now I am very much a fan of this San  Francisco duo.