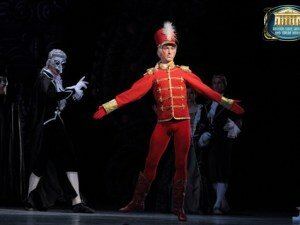 The Nutcracker is a ballet tells the story of Marie, a rather sad little girl, whose godfather gives her a Nutcracker doll as a present on Christmas Eve. Having  crept downstairs at midnight to play with her new doll, Marie is swept up in a beautiful Christmas fantasy adventure when it comes magically to life and defeats the army of the evil Mouse King who has invaded her house. The handsome Nutcracker Prince whisks Marie away through a Winter Wonderland to the Land of Snow and then on to the Land of Sweets where the Sugar Plum Fairy entertains them like royalty with festive dances in recognition of the Prince’s heroic defeat of the Mouse King.

Having never attended a ballet prior to The Nutcracker, my friend and I were both unsure as to what to expect from both the dancers and the accompanying orchestra. The performance that greeted us, however, was seamless and graceful; every move precise and well-choreographed. The dances flowed nicely into one another and each told a different section of the story, which unfortunately were sometimes hard to understand because they veered slightly from the traditional tale. The dancers had continuous expression and emotion on their faces, even when they were standing aside to watch, which helped create an atmosphere of everyone being included, even if there was only one leading dancer performing at the time.

As for the music, the orchestra captured the mood and tone of each dance well and provided the perfect accompaniment. The pieces played were a nice combination of well-known and lesser known, though some did sound quite similar at times but this was not that noticeable because of the focus on the actual ballet itself.

Overall, we both really, really enjoyed the ballet and it was nice to see the Nutcracker story told just using dance. A definite recommendation if you are looking for something to entertain yourself with during the Christmas months!