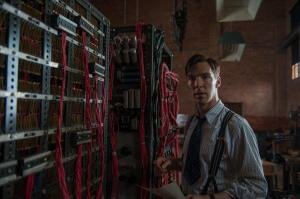 Alan Turing was an incredible man and it is completely impossible to summarise everything he did within the confines of a conventional word limit. Suffice it to say that he is commonly cited as the father of computers and one of the finest minds of his generation. The Imitation Game (which takes its name from a fundamental principle of the ‘Turing Test,’ which is a test to determine whether a machine is ‘intelligent’ or not) focuses in particular on Turing’s work as a cryptanalyst at Bletchley Park during Word War II and the cracking of the infamous Enigma code, as well as his tragic death. Turing was gay at a time when homosexuality was illegal in Britain and had to undergo chemical castration, which ultimately led to his suicide a couple of years later.

I had initially thought that the non-linear story would be a distraction but it was actually pretty effective; the narrative jumped  back and forth along the timeline of Turing’s life and tied perfectly with the framing device of Turing’s police interview.

Acting wise, everyone does well, although none of the actors seem particularly challenged; we know that Cumberbatch is adept at playing geniuses (which is the correct plural, if you’re wondering) and is excellent throughout. Mark Strong looks like he is having a lot of fun as a sarcastic spy; Keira Knightley, Matthew Goode and the rest of the codebreaking crew are also brilliant. Charles Dance is good as the stern military head of Bletchley Park, Commander Denniston, although I agree that making his character the ‘bad guy’ of the movie is a disservice to the actual Commander Denniston, as his family have since pointed out.

Yes, the film takes certain liberties with the historical facts. Denniston was not the ‘bad guy’ (I’m pretty sure that was Hitler); Turing did not call his codebreaking machine Christopher (as far as we know); and, although there was a Russian spy among the people who worked alongside Turing at Bletchley, he wasn’t discovered until after the war ended. It’s all very well to point out these inconsistencies but the film shouldn’t be judged by them too harshly. It’s a movie, not a documentary, after all. Further, while it may not be entirely factually accurate, the film certainly made me want to find out more about Enigma, Bletchley Park and Turing himself – and that can only be a good thing.

There has been some criticism of the film that has centred around the portrayal of Turing’s sexuality; to paraphrase, that ‘he isn’t gay enough.’ In my opinion, this kind of misses the point of the film somewhat. What was done to him was monstrous, there is no denying that. He was treated appallingly by the government (along with many other homosexuals at the time) despite everything he had achieved, simply because of his sexual preference. For  me, that is the fundamental message of the film; it treats Turing’s sexuality as something inconsequential because that is how it should be treated – it shouldn’t matter. This also serves to highlight the tragedy of his death and the despicable legislation of the time. Should we view Turing’s achievements as any more or less extraordinary because he was homosexual? Of course not. Should we view his chemical castration by the government because of his homosexuality as utterly appalling? Absolutely.

I could go on and on but that’s the key point, I think; that people should be judged by their deeds rather than who or what they are. That’s what makes us human, rather than machine.

If you’re aged between 15-19 you can get tickets for the Tyneside Cinema for just £4! All you have to do is sign up for a FREE Young Tyneside Card!

This entry was posted in Film, Screen and tagged Film, Review, Screen, The Imitation Game, Tyneside Cinema. Bookmark the permalink.