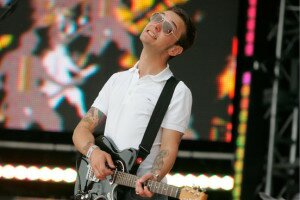 I must be honest with you, when I left my house to see The Ordinary Boys make their return at Newcastle’s Think Tank, I was feeling pessimistic. How could a band who were around ten years ago with a career peaking because of their front-man taking part in Celebrity Big Brother really be that impressive? I was fairly sure they’d have passed their time and were in it for one last daft bit of fun  but I was quite surprised with the outcome.

On arrival, the dark, intimate venue was actually over half-full. Support came from London four-piece  Whales In Cubicles. They weren’t exactly a great warm-up choice, not very current and lacking some musical excitement, but despite this little disappointment they had a good energy on-stage and the crowd seemed in high spirits.

When Samuel Preston and the Boys sauntered on-stage to half-hearted cheers, he requested that everyone take a step forward before changing the atmosphere with a collection of indie-pop hits that had everyone moving in no time. Even when they introduced a few new songs, joking that it might be a good time to check your Facebook, the fans were loving it.

Preston, as he is better known, is undeniably a talented songwriter and a charismatic frontman. Aside from The Ordinary Boys, he’s co-written number one hits for the likes of X Factor star Olly Murs and had a shot at his own solo career after The Ordinary Boys first split in 2008.

He may well have been fairly intoxicated throughout the gig – constantly swigging from cans of Red Stripe – but he knew just how to hold an audience. Though the crowd wasn’t huge they all seemed to love him, some even jumping on-stage to share his mic.

There was something very charming about this gig. Sometimes  it was as if the band were taking it less seriously than the crowd were, thanking them for “indulging us in our mid-life crisis and coming along to have a laugh.” Although they may not be as good as they were in their prime, they took it as an opportunity to do what they love doing all over again rather than thinking of themselves as has-beens.

A little speech was made between the band before they played their first ever single, ‘Maybe Someday,’ noting how thankful they were for people coming out to see them. The miniature mosh-pit at the front of the stage erupted and everyone was singing at the top of their lungs.

Not wanting to waste time with an actual encore, the band turned their backs for a few moments before launching into the hit that they’re most famous for, ‘Boys Will Be Boys.’ Preston dived into the crowd and relished in his adoring fans, passing around the microphone and dancing carelessly amongst them.

Although my expectations were low, The Ordinary Boys proved they were more than just an old band who no one really cared about. In some ways it seemed that everyone in this room cared about them, more so than most other bands I’ve seen. It’s been a long time coming but The Ordinary Boys are, it seems, back with a vengeance.