Posted on 8 December 2014 by Laura Brewis

I have been given three Christmas books for children of different ages. 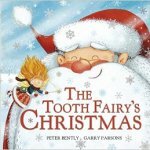 The first is my personal favourite, The Tooth Fairy’s Christmas by Peter Bently and Garry Parsons. This is a beautifully illustrated book that follows a fairy as she has to swap a tooth  for a pound coin on Christmas Eve. I would say that this would be a great present for a child aged between five and eight but could be enjoyed by children of all ages (or even 16 year olds like me!)

The second is I Love You Father Christmas by Giles Andreae and Emma Dodd. This is about a boy who is telling Santa how he has been good and deserves presents and, as the title suggests, how much he loves Santa. I would say that this would be great for three to five year olds who are may be just starting to read.

The final is Billy Bonker’s It’s A Crazy Christmas! by Giles Andreae. It’s about a boy’s Christmas fiasco as everything seems to go wrong with what he is doing and what his family is doing. This would be a good reason for children aged about seven to ten but may only be enjoyed if the child also enjoys slapstick comedy which is not my preferred comical effect. In conclusion, these are three very different books for different age ranges, so there should be something suitable for any child’s stocking.