Stitch Up by Sophie Hamilton 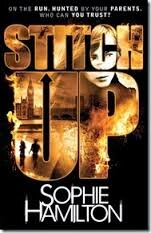 Now, most people have probably felt confined by their parents at some stage in their life; that they control your life, or they’ve told you what to wear, or what not to wear, the list could go on. It’s almost a rite of passage in growing up but in Stitch Up, Dasha Gold’s parents want to turn their daughter into a ‘living logo’, the embodiment of their brand, where even her own skin is taken away from her and brand comes before family.

Sophie Hamilton’s debut brings us a heroine who attempts to break free from that life, making us laugh in her assessment of her situation, and causing us to admire her along the way through the first person narrative. Her relationship with the street savvy Latif drives the novel, offering humour and danger all at once (who doesn’t love a rapist getting a stiletto to the arm pit before being finished off by a modern day cowboy in overalls?), in a story that is both an Dasha’s escape from a “privileged” life, and a journey to find her birth mother. Latif, particularly, is a fantastic character acting as cool (yes, despite the cow boy hat), revolutionary figure; deeming a street of home owners ‘paranoid’ amongst other satiric observations of a not too distant future.

Hamilton has the capacity to stun with a number of outstanding lines, “he rubbed his huge hand back and forth across his shiny head, like he was trying to warm up his brain” springs to mind and is perhaps only slightly let down where some language begins to feel targeted at the young rather than young adult. That said, you shouldn’t let this detract from your opinion of the novel. So, if you’re someone who enjoys a fast paced novel of humour, drama and action in the midst of a thinly veiled social commentary of our surveillance society, as well as a critique of the promotion of cosmetics, then Hamilton has written the novel for you. An easy read regardless of it being more than three hundred pages, Stich Up should find its way onto a number of your bookshelves when it is released May 1st by Templar.

This entry was posted in Books, Fiction and tagged Fiction, Sophie Hamilton, Stitch Up, Templar Publishing. Bookmark the permalink.