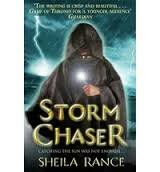 Storm Chaser is the second novel in Sheila Rance’s fantasy trilogy, a series that has already garnered comparisons to big-hitters of the genre such as Game of Thrones and Chronicles of Ancient Darkness. Such statements are arguably a little hyperbolic; I found much to enjoy in Rance’s well-crafted, Bronze Age world, but equally I felt that a certain flatness of character prevented the book from being as truly gripping as this earlier praise might have suggested.

The setting of the trilogy in an imagined Bronze Age is impressive, all the more so for the successful combination of both realism and magic. This second instalment traces the progress of the young protagonist Maia: marked out as the Sun Catcher, she is a person of great power and destiny. Formerly living with her adoptive father in the community of the Cliff Dwellers, Maia now lives in the Sun Palace, where she performs the daily ritual of ‘catching the sun’ to ‘put an end to the long cold’ that has troubled the land. But unsurprisingly, troubles aren’t ended so simply, and Maia must contend with her murderous aunt, Elin, and niece, Caspia, who threaten to murder her and put Caspia in her stead. There are plots, assassins and narrow escapes a-plenty. The imaginative and careful details of the narrative tick many of the typical fantasy epic boxes: a lonely protagonist, animal familiars, internecine family histories and a pervasive connection to the elements and the natural world. Magic in the narrative is handled intelligently, and takes it’s most intriguing form in the “song of the silk”, which has the immense power to read thoughts and trap memories, and is naturally coveted by all those who wish to gain power, or to prevent it falling into the wrong hands.

The world that Rance creates is more believable when it moves away from the Sun Palace and into the watery murk of the Cliff Dwellers’ world. Some of the novel’s best writing is in its descriptions of this hazy coastal landscape, with its sea lizards and Marsh Lords. Small details such as a saffron-yellow dress, a finely wrought bangle and a stack of blueberry flatbreads illuminate a world that, at times, can feel a little too distanced. Maia is in theory an excellent heroine, but her dialogue and overall personality are not always entirely stirring, and it is hard to feel a great deal of emotional investment in her future. Rance’s writing is perhaps just a little too spare to fully flesh out that rich sense of a world that more eminent fantasy novels manage to create. That sparseness, though, does lead to elegant writing; a single thought can “stab” like “a fishing spear”, a person lies “curled like an unborn child in its mother’s belly”. Storm Chaser ultimately presents an intriguing, thoroughly researched and cleverly detailed picture of a time and place in history that is not often unearthed.

For more information on Sheila Rance or the Sun Catcher Trilogy, visit her official website.