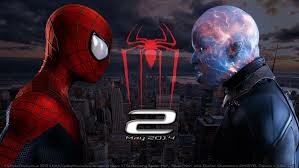 Two years after the original (well, original in this series) hit cinemas, The Amazing Spider-Man 2 has swung into theatres, and while it improves on many issues featured in the original, it shows signs of heading in a troubling direction. The most obvious change is the movie’s shift in tone, a far cry from the more “gritty” (as gritty as Spider-Man gets, anyway) reboot, The Amazing Spider-Man 2 is much lighter and so obviously targets a much younger audience. This is not 2012’s brooding angsty Spider-Man, this is Spider-Man ripped straight out of a Silver Age comic book.

Fortunately, that’s not a bad thing. This movie, unlike any of the previous entries, feels like a Spider-Man film. Mark Webb gets everything about the superhero right; the web-swinging, the wit, the action, the villains, the cinematography, the characters, that it all feels like a Spider-Man comic on the screen. Just knowing they got every facet of the Spider-Man mythology right for once is such a joy to watch – and this is easily where the film excels the most. However, not everything translates well from comic to screen. A lot of the dialogue feels a bit silly when said out loud and not read on a page. Yet this is more the problem of director Mark Webb and the writing team than the source material. Spider-Man is at his best on-screen with the right balance of silly fun and emotional Peter Parker angst. While Mark Webb mostly gets the balance right, especially in the beginning and in the final act; the middle falls under the weight of itself and it gets too goofy and loses too much focus on the story it wants to tell. The film just crams too much in and needs to establish too many things in order to create the franchise Sony wants, that it feels like there are 4 or 5 different films fighting for prominence inside itself.

However when The Amazing Spider-Man gets it right, it really gets it right. The best part about this franchise is easily the relationship between Andrew Garfield’s Peter Parker and Emma Stone’s Gwen Stacey. Their chemistry on-screen is such a joy to watch, and their performances really give the movie a warm heart and soul that just manages to stop the whole thing imploding into a mass of special effects. It’s these smaller character moments where the film really shines, either in truly emotional scenes between any of the main cast or the witty Spider-Man interactions with villains or loved ones. These moments really are what a Superhero film should be and prove that the appeal of these films isn’t just the CGI heavy scenes. It feels like Mark Webb really wants to focus on character and consequences, but Sony wants to establish a franchise and universe in one film and it’s such a shame because if the excess like Electro and a few sub-plots were cut or saved for a later film then this could have potentially been the best Spider-Man film yet.

Overall, The Amazing Spider-Man 2 in many ways is one step forwards and two steps back. It gains the heart and assurance that was missing from the original but it feels so bloated that inevitably not everything works. It has enough going for it for people to like, even love it, it’s just a shame that it’s brought down by being too unfocused and too convoluted. Nevertheless the start and end are so strong that the many problems of the second act feel irrelevant. The Amazing Spider-Man 2 isn’t a bad film, nothing close has captured the idea and atmosphere of Spider-Man like this, it’s just frustrating that the shortcomings stifle what so wants to be, and could be, a fantastic superhero film.

This entry was posted in Film, Screen and tagged Film, The Amazing Spider-Man 2. Bookmark the permalink.