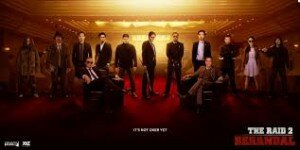 If nothing else, The Raid 2: Berandal is an argument for why sequels can work. The film isn’t just a rehash of the popular original, it expands so much on everything that featured in the original that it feels like an entirely different picture. We leave behind an extremely streamlined and focused two-hour adrenaline rush for a multi-year crime epic, more Infernal Affairs than Dredd. The Raid 2 makes its predecessor look like a student film. Okay, I might have let hyperbole get the better of me, but in many ways it’s true; The Raid 2 improves on almost everything in the original film that it makes it look like a practice run, a test in choreography and cinematography. The Raid: Redemption was an appetiser, and two years later we finally have the main course.

Even by looking at it’s two and a half hour runtime, it’s easy to see how ambitious The Raid 2 is. The film really is quite dense; it contains a much beefier and narrative-centric plot than the original, chronicling the implosion of three Mafia families as well as police corruption. It’s all classic action film fare; the beats of every undercover cop thriller are there, but it’s presented in such stylistic way with such interesting and unique characters that you don’t care that The Raid 2‘s narrative doesn’t break new ground. Using conventions isn’t a bad thing and The Raid 2 is engaging enough to prove that. The film is a much slower beast than it’s predecessor, it takes time to establish it’s world and characters instead of rushing to the next action scene, and the breathing space is appreciated; if nothing else these sections serve to show off the absolutely gorgeous cinematography. Evans’ direction is more mature this time around, and when The Raid 2 isn’t kicking you in the face it moves and feels like an art film, more Nicolas Winding Refn than John Woo.

But kick you in the face, The Raid 2 will, and you’ll never want it to stop. While the film this time has some impressive narrative chops, the fight scenes are still the obvious highlight. The action in The Raid 2 has the best choreographed, most visceral action sequences ever put to film. It’s an absolutely beautifully choreographed movie, but more importantly, it feels real. So many high action martial arts films lose a bit of impact because, as good as the choreography is, it feels staged, either because of the camera work or because of the acting. The Raid 2 nails both of these perfectly so you see every blow, but more importantly you feel every blow. There are so many broken bones and open wounds in the film that at times it threatens to start feeling uncomfortable, but fortunately The Raid 2 has such fun with itself and goes so over the top that you can’t help but love every single minute of it. New characters help the action of course, because as good as the action scenes are, they would mean nothing if the audience wasn’t invested in the characters. Even what should be one-note, smaller characters who turn up for a scene or two such as the duo of Hammer Girl and Baseball Bat Man, are played with great unspoken nuance and attention to detail that the film encourages you to figure out their backstory for yourself.

Simply put, The Raid 2 attempts to expand and out-do every single thing in the original and often time it succeeds. They’re both very different films and are only really linked by a few returning characters and the blistering signature action scenes, but it’s not a bad different. The Raid 2 feels more mature, more important, and feels like Evans and his team smashing their feet down and proving their original wasn’t a fluke. Though it’s not as accessible as the original, The Raid 2 doesn’t want to be, and it shouldn’t want to be. Berandal isn’t just a retread of the first film with slight bits and pieces changed, it’s everything a sequel should be and even though it buckles under it’s own ambition, it should be rewarded for not playing it safe in a sea of samey franchise films. In the end The Raid 2 will assault your senses and beat you into submission for two and a half hours and by the end of it you’ll be wondering how soon you can come back for more.

This entry was posted in Film, Screen and tagged Film, The Raid 2. Bookmark the permalink.