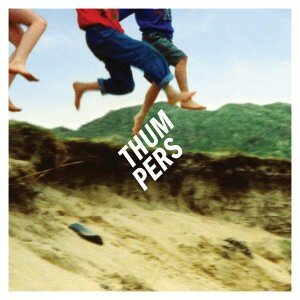 Already out in the US, London-based band Thumpers make their mark on British soil with debut album Galore. The LP is a celebration of coming of age, the first lyrics spouted at you, to “stay young”, are a proclamation of the entire theme. This is ‘Marvel’, and it marvels in the lush joy and beauty of being an adolescent. It invites you to be free, to leave everything bad behind and just take in the new.

And you will want to take in the new through this emerging band as they introduce their whooshing synths, bouncing beats and colourful guitar work. Galore is a tumbling arrangement of indie rock which makes you think back to the album cover art and feet tumbling over a sand dune. Each track is a celebration, irresistible and emotive, such as when the Warwickshire duo sing in ‘Unkinder (A Tougher Love)’ that “you’ve let us too far in your heart”. Here, they show the power that they have – to get into the listener’s soul. And they also understand that even the smallest struggle is no less real, no less important and no less beautiful.

‘Dancing’s Done’ could be a great anthem, stating the bittersweet glory of our unattainable dreams, while ‘Sound Of Screams’ and ‘Come On Strong’ continue to create, wonderfully, an elevated sensibility.  ‘Now We Are 16’ and ‘Tame’ go in deeper, dictating the beauty and stupidity of being young. The former repeats that desire to go back, to stay young, and to recapture the past. And what about the latter? Well, ‘Tame’ is easily the best track Thumpers have to offer. The huge rolling drums set against a dystopian vocal loop might be unsettling, in such a way that it is somehow fun, joyful, and celebratory.

The album’s title track, which gained support from Radio 1 and 6 Music, is all about escapism, imagining a guilt-free environment in which to indulge in those first lustful experiences that come with youth – getting wasted, messed up, and sleeping around. Everything that gives you a sense of growing, yet reminds you that you are still just as young and stupid.

I have to admit that Galore it is at its best during the first half of the album, full of great songs with instant hooks and innovative ideas, but this is shamefully wasted as it is not consistent. However, there is hope through playing the closing song, ‘Together Now’, as this is reminiscent of those first five tracks which gave Thumpers their unique charm, and reminds you that this band have a whole lot more to offer. They are ones to watch out for.

All in all, Galore is filled with the highs of summer youth through its extrovert melodies and glimmering production. Themed with a hyper-real youthfulness and tongue-in-cheek lyrics such as “If we should die before we wake/Don’t leave our bodies this way”, the album reminds us that although we are going to die, to be young is not just a part of growing up.

To find out more about Thumpers, visit their official website.