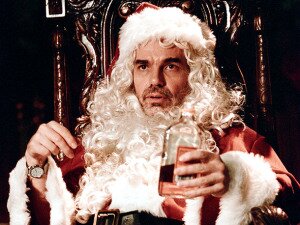 The John Lewis Ad has hit the silver screen and shops everywhere are over-playing Band Aid and The Pogues (and, if you’re from Newcastle, you’ve probably seen Fenwick’s windows at least once already.) Yep. It’s officially the over-long Christmas season. You probably have that favourite Christmas film stored away for Christmas Eve or Day and are waiting to see what Sky Movies has on offer…probably something jolly and sweet. But, if like me, you sometimes find this time of year a bit sickly, why don’t feast your eyes on these gems that honour the ‘bah- humbug’ spirit.

This Santa Claus is not fat, round or jolly. Billy Bob Thornton’s booze drinking, womanising Santa Claus is hilarious! (In a dark comedy sort of way). A strange friend in the form of a socially inept boy called Thurman Merman makes the off-the-rails Santa see the error of his ways after years of drug abuse and robberies. This yuletide film turns out to be rather heart- warming yet filthy at the same time.

Magical is the first word that comes to mind when you think of this one. It’s one of Tim Burton’s most impressive films that could almost be a fairy-tale. Johnny Depp is also remarkable as a silent film actor; his performance in this became an introduction of his acting ability. Mainly, I love the bizarre reaction of characters once the snow starts to fall. Gothic yet whimsy, full of wonder, and most of all, hope.

Centring around a teenage boy who gets a critter for Christmas and must follow three very important rules to care for it properly: never expose it to bright light; never get it wet; and most importantly, never, ever feed it after midnight. Of course, these rules are too hard to adhere to and the cuddly little creature multiplies into a herd of gremlins that begin terrorizing his small town. A classic 1980s cult comedy!

It just wouldn’t be Christmas without Bruce Willis, in a vest, fighting the bad guys. Honestly, it’s loads more fun than The Muppet’s Christmas Carol and still stands as one of the all-time greats of action cinema, 1980s films and Christmas film festivity.

Although probably the most ‘Christmassy’ movie here, it’s really more the ultimate alt. Christmas tale. It’s basically a story of desperation and the constantly thwarted dreams of our protagonist that culminates in attempted suicide. Ironically named It’s A Wonderful Life, it is one of the very darkest films produced within the Hollywood system (I mean, the villain ends the film completely unpunished!) It is a film about failure, about a man who compromises his every ambition. It’s one of the few films that shows just how stressful Christmas can be. Yet it is the greatest feel-good Christmas film you will find, as the ending is simply divine.

This entry was posted in Film, Screen and tagged Christmas, Film, Screen, Top 5. Bookmark the permalink.