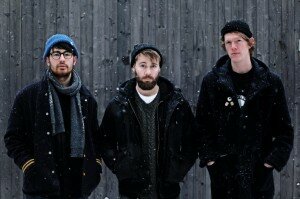 First on stage is Electric Church, an instrumental soloist whose music can be described as a mix of chilled new waves with a hint of post-rock. His music typically begins with a calm tone and slowly transforms into an edgier and heavier sound. At times the contrast between soft wave and heavy riffs is so great that the walls of The Green Room start to vibrate.

Second on the billing are Atlas Wynd, a two-piece band from Yarm with a strong combination of a loud guitar and set of drums. The teenagers received a more enthusiastic reception than the previous entertainer, but that could be due to the small army of supporters the band brought with them to the gig. To conclude the set, the boys end with their latest single, ‘Creep’. The catchy tune is perfect for a teenage audience, which is understandable considering the band are still only teenagers themselves.  Overall, the band really warm up the audience ready for Traams.

After much anticipation, Traams take to the stage with the upbeat number ‘Swimming Pool’. The crowd are instantly engaged. By the third song, Traams choose to play a slightly less energy filled, more grungy number, which the audience adore. The night continues with hits such as ‘Grin’, ‘Demons’ and the seven-minute-long epic that is ‘Head Roll’. Some members of the audience even break into a dance when popular single ‘Flowers’ blasts from the instruments. Amusingly, the venue named a cocktail after the hit, advertising it with the pun ‘you won’t even know your name’, inspired by the lyrics of the song. The boys of Traams politely thank the audience for coming after every song, indicating that they appreciate the crowd that has assembled this evening. To conclude the set, Traams end with ‘Klaus’, a mix of heavy bass lines, melodic sounds and raw voice, creating the perfect formula for a closing song.

The audience had a perfect reason to spend their night in The Green Room; Traams really put on a show. Despite being a three-piece, they easily filled the small stage and at times the bass player even chose to play off the stage instead. With a diverse yet suitable choice of support acts and a strong headliner, the gig had all the right ingredients. Sadly, the lack of attendees did not give Traams the justice they deserved for an incredible performance. Hopefully, and in the very near future, the band will receive a larger audience next time.

For future events at The Green Room, visit their official website.

This entry was posted in Live music, Music and tagged The Green Room, Traams. Bookmark the permalink.